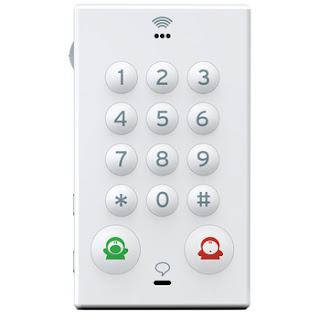 Mobile phones have pretty much taken over the universe. One decent mobile phone has the computer power probably capable of sending people to the moon, yet we use them for mundane activities, like scheduling, texting, emailing, and sometimes just old fashioned conversation.

However, everyone has that Luddite in their life who either refuses to get a mobile phone, or insists the one they have is too complicated. And even though we roll our eyes at them, try to give them technology assistance, and eventually even holler at them in frustration, they are stubborn mules. What to do? How about the gift of a John's Phone? Made by Dutch designer John Doe Amsterdam, this phone is whittled down to the simplest of tasks: phone calls. It will make and take calls. It will not text, email, or engage in late '90s techno ringtones. The John's Phone works with any SIM card, has a talking time of six hours, and a standby time of 3 weeks. It requires no contract and includes an earpiece for safe conversing while driving. Plus, its larger keyboard is easy to use, and it boasts a pad of paper and a pen for taking messages (how much more Luddite can you get?).

Although I think this phone is ideal for the recalcitrant yet needy older parent in your life, its lack of text and email abilities lend itself well to kids and teens. Hey, if the option's not there, they can't abuse it! Find the Old Bat... oops, John's Phone at A+R for $160.
Posted by The Toad at 11:29 AM