The Building Blocks of Nature 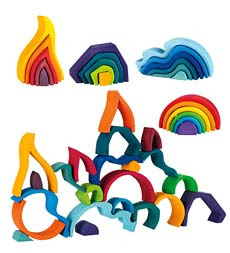 Yes, the Toad is on a kid's gift kick right now. Not just because school started, but because many of you either know someone trapped at home with a dissatisfied child or are already one of those unfortunate souls. Those restless three year olds need amusement. They need fun. They need relief. And, since mothers are apparently not allowed to switch on Baby Einstein anymore, and it's too early for a martini, a toy solution is in order.

In terms of developmental bang for the buck, just about nothing beats a set of blocks. Construction leads to independent problem solving skills, as well as extending the frustration threshold. I'm sure the kid in question already has a set of blocky blocks, but these block sets are quite different. Based upon nature's elements, the Rainbow, Fire, Stone, and Water sets fit together neatly into the shape of what they're named, but come apart to create wild and wonderful structures. Add shapes like points, turrets, curves, and waves to a straight structure, and suddenly the possibilities are endless. You might have a budding little Gaudi on your hands.

Each one of these Elements sets costs $39.98 from Magic Cabin. Just make sure the giftee in question isn't violence prone; if so, avoid the pointy, dagger-like Fire set for everyone's safety.
Posted by The Toad at 9:28 AM