A Rant: The LA Local Shopping Category I WON'T Feature 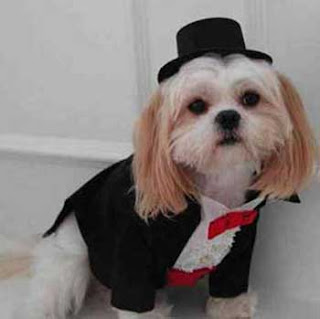 Let me begin by stating that I love my animals. I have many. But I do not treat them as I would my child. Case in point: I don't give them holiday gifts.
It's not just that the economy is bad and that, if I'm going to spend money, it's going to be on other people. It's also that, as much as obsessive animal owners refuse to believe it, pets just don't care about the holidays. Think about it: the holidays is a completely human construct, created as a way to celebrate religion (another human construct) and the change in season (yet ANOTHER human construct). Animals don't practice religion. Your dog doesn't want to wear a yamulke to celebrate the Festival of Lights. He also doesn't know from Santa, Jesus, or the Three Wise Men. And odds are, your cat cares even LESS about these things.
In fact, I would argue that giving the animals stuff during the holidays could be cruel. Case in point? My father had this wonderful dog. He decided on a date for the dog's "birthday," and every year, on that day, he would hand the dog a steak. There's no doubt that the dog loved the sirloin. But the giving of it made no sense to him at all. I mean, here he was, minding his own business on a day just like (to the dog, anyway) any other day, and suddenly he was handed a steak. Not for good behavior, but just (to the dog) out of the blue. I used to wonder if the dog was puzzled the rest of the year, trying to figure out what in the hell he did to earn that steak. Then again, perhaps I'm over thinking this.
Anyway, there will be no animals dressed for dinner at my house this year. No antlers tied to their heads, no random pieces of meat distributed. And since pets could care less about new bowls or collars or leashes, I'm not handing those out, either.
So, there will be no local pet gift recommendations. Sorry. Stay tuned for kids stuff and major accessories.
Posted by The Toad at 10:35 AM