I know that V-Day is supposed to be about love, specifically between two people of the human species, but I take a bit of umbrage with that assumption. Because, if you're really honest about an ideal "mate," it would be an entity that doesn't care if you clean the house, doesn't mind some shaky personal hygiene, certainly doesn't care about how you dress, and will always let you have control of the remote. This is a tall order, and only your dog fills it (I'm excluding cats because I'm convinced they make subtle fashion judgments, and because they are anti-literacy, always lying upon whatever you're trying to read).


So, why not give your real best friend something excellent to chew on? I'm talking about fresh meals from the dog food company, Hound's Tooth Cuisine. Each meal is individually packaged and is the perfect amount for your dog, whether teacup poodle or mighty mastiff. They even come with calorie counts for heftier models. And you can choose from exciting varieties like Surf and Turf, Sunday Afternoon Picnic, or (perfect for Valentine's Day) Breakfast in Bed. Every meal is full of meat, veggies, and grains, all guaranteed to make your canine's eyes water in anticipation. Plus, the packaging is compostable, and the nutrition is totally sound.

Hound's Tooth Cuisine has gift certificates available, so you can "gift" a doggie loving friend with some premium dog grub. Or, order some for your own "real" best friend. It'll be the most satisfying V-Day gift you give or receive this year. At Hound's Tooth Cuisine.
Posted by The Toad at 11:04 AM 1 comment:

This is obviously a gift for a lady, preferably your lady (although this would be a good recommendation to make to the clueless but well meaning male of your choosing). Jewelry is tough, and individual, but there are few, I believe, who wouldn't like this necklace.

After all, this silver pendant (it's available in 10K gold as well, at a far higher price) is by Me & Ro, one of the classiest casual jewelry companies around. It's sweet, yet not treacly in that annoying Valentine's Day way. And, who doesn't like stars, especially stars with lovely sparkly rubies in the middle of them? This is a wonderful every day piece for lazy jewelry owners (the Toad is known for this) who like to wear the same things day in and day out.

Turn Them to Jelly

Yes, it's another Valentine's Day idea, and it's a pricey one, too. On the other hand, this idea is so cool and unique that I think it's worth blowing through the Find A Toad $200 price limit.

One of the most mesmerizing and calming things I've ever done is stare into aquariums. And by far the most calming aquariums are the ones filled with moon jellyfish. Usually, you have to go to someplace like the Monterey Bay Aquarium to see such things. But now, you can buy your own jellyfish aquarium, stock it with the creatures, and bliss out in your own home. This is a wonderful gift for someone with a penchant for such things (and who doesn't mind fiddling a bit with aquariums). Moon jellyfish: nature's instant Valium.

At $249, this aquarium set up isn't a cheap Valentine's Day gift. On the other hand, it'll have a far more lasting impact than the flowers that fade. At Jellyfish Art.
Posted by The Toad at 12:28 PM No comments:

A Most Macho Taco

We've officially entered the winter blahs. The holidays are over, the weather isn't so great, and the days are still short. Plus, everyone still wants dinner. And dinner, during the winter blahs, is a real drag.

Support your giftee who's forced to make dinner with some life saving and season spicing tools. If you're any sort of foodie, you already know who Rick Bayless is: a Chicago chef with Mexican cooking chops. His food is delicious, and his cookbooks are excellent (although often a bit labor intensive. But Chef Bayless offers a cheat in his amazing simmer sauces. These totally inexpensive pouches of south of the border goodness are a meal booster in a baggie. Forget those homemade tacos with the MSG flavor packet; a pound of meat and a dose of taco simmer sauce make the base for an incredible meal. One of my personal favorites are the mole sauces for chicken, as it delivers a meal that tastes almost as good as eating at Frontera itself.

Order an assortment of these sauces (there's enchilada sauces too, for easy casseroles in a flash) for your Reluctant Dinner Chef. He or she will thank you and maybe even invite you over to share in the repast. From Frontera Kitchen.
Posted by The Toad at 7:12 PM 1 comment:

As I've often mentioned, this is not a beauty blog. Anything I recommend hasn't been sent to me by beauty publicity babes, seeking press. Nope, I try anything out either on my own dime, or because my beauty gift buddy, Alison, gives it to me (I always give her cult beauty products, too. I recommend forging such a deal with a close friend; it has fabulous benefits).

Now, to the gift. Many women receive roses on Valentine's day. While I have no objection to flowers, they do die, and thus aren't what I would term a lasting gift. This rose balm by the super luxe cosmetic company, By Terry, however, will see you and yours through at least the next couple of dry, lip puckering months. This is fancy ass stuff, for sure. The packaging is heavy and lovely. The formulation glides on and seems to plump (it has a slightly whitish pink tinge). It has spf 15 for sun protection. And, it smells nicely of... roses!

Order this for your best friend for Valentine's Day, or a birthday, or just because. It's 60 bucks, which virtually guarantees she'll never buy it for herself. At Barney's, naturally.
Posted by The Toad at 11:32 AM 1 comment:

As a gift blogger, I'm required by some sort of unwritten retail law to promote Valentine's Day gifts. Not because it's such a great holiday (honestly, it leads to more pressure and disappointment, for the attached and unattached alike, than virtually any other holiday), but because it's at least an opportunity to promote creative gifts.

So yes, this is a travel coffee mug. But, it's a travel coffee mug that perfectly replicates a 1.1 Nikon lens. For camera junkies, this is pretty nifty. And, although I know women who love cameras, I know way more men into the gear. I also know plenty of men who are into their coffee. Thus, this is a good and useful V-Day gift for the man (or men) in your life. If they like cameras. If they don't, don't worry: The Toad has lots more geeky V-Day gifts on the blog docket.

This lovely gift is just 30 bucks on Amazon. Yes, that's more than a card; I told you this was an obligatory holiday, didn't I?
Posted by The Toad at 10:16 AM No comments:

These Have Mauna Loa By the Balls 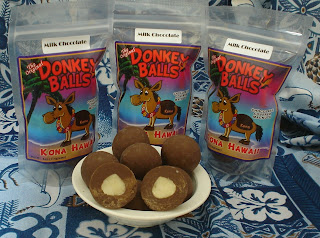 So, here's a little treat straight from the Big Island of Hawaii. You know how you go to Hawaii and always end up getting some sort of mac nut treat? And how it usually involves a can or some cardboard box, emblazoned with the brand "Mauna Loa?" And how, while they're good, the treats usually aren't that great? Well, these "Donkey Balls," made on the Big Island by hand, are a much better mac nut candy. Yes, they all have funny, dirty names. Personally, I like the "Salty Balls" (chocolate covered mac nuts rolled in Hawaiian sea salt) and the "Flaky Balls" (ditto, but with toasted coconut instead of salt). The secret is the Guittard chocolate, very high quality, a lot of it, and the fatty nut in the middle. One ball will usually suffice, which is way better than consuming a whole bunch of Mauna Loa lumps.

I saw a lot of grumping on Yelp about the cost of these balls, which at about twelve bucks a bag is admittedly not cheap. On the other hand, it's a pretty high quality product. Plus, the main Kona store has this great cat named Mr. Butters, and you've just got to support an establishment like that. Buy the balls for your friends and enemies. At the Donkey Ball Store.
Posted by The Toad at 5:21 PM 2 comments: