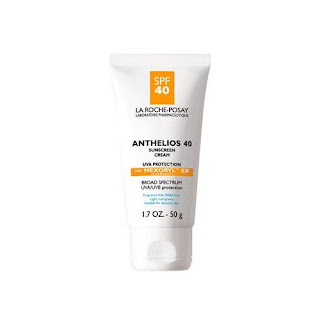 So far this year Los Angeles has seen precious little of the death rays the sun can provide. Indeed, the Toad would be up for some lethal ray exposure, despite the risks. Toads get warts if not provided with a bit of sunshine. Complaints aside, the sun is coming, and with it the subsequent golden tans, sunburns, wrinkles, spots and other assorted lovelies. On top of that, science has now concluded that most sunscreen can actually make the death rays worse. It's enough to make a Toad crawl into a burrow and sulk.
An entity called the Environmental Working Group has just released its list of sunscreens that are just marginally acceptable (in other words, they pretty much hate them all, but some less than others). This Anthelios SPF 40 cream made the "Best in a Line of Losers" cut. I've always found that Anthelios is great sunscreen. It works, it doesn't irritate, and it doesn't block pores too badly. It has no objectionable smell and has good coverage. For some odd reason, this was the only Anthelios product on the recommended list. I have no idea why. It's a good bon voyage gift for a vacationing friend, or for a friend deeply concerned about skin in general (Los Angeles is now chock full of these unnaturally pale women, so white they look like they've been snorting arsenic for years).
Just remember to really slather this stuff on, or apparently it doesn't deliver that SPF 40 punch. Find it at Amazon and defy the death rays.
Posted by The Toad at 8:17 AM