Rise of the Manbag 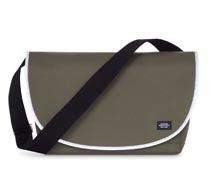 So, never in a million years did I think I would ever advocate men carrying bags. Sure, my literary agent grandfather did carry a man purse, but that was when he was in his sixties. The trend was that no self-respecting man under that age should consider a bag. Well, maybe he should.
Hear me out on this one. Women carry a lot of stuff around with them, and there's an entire culture devoted to women's bags, indeed a worship that verges on religion. But what about these poor guys? Think about it: on an average day, a typical guy is carrying a wallet, a cell, sunglasses, keys, and sometimes a money clip too. All this, with only pockets. Thus the boxy wallet butt phenomenon, the rattling chains to secure keys, and the endless leaving of expensive sunglasses all over town. Guys aren't good at tracking stuff to begin with (I always say that they'd lose their asses if they weren't attached), and this state of affairs puts them in constant jeopardy of losing important goods on a regular basis.
So do your man a favor and at least attempt to help them carry their precious belongings in an organized way. And start by checking out this smallish messenger bag, and all the other manbags, available at www.jackspade.com. It's an idea whose time has come, and some guy has to get the message to the masses. Make it your man (my guy, he won't consider it. Maybe if someone goes first...).
Posted by The Toad at 7:29 PM