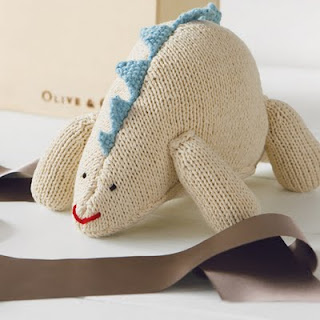 With someone near and dear to me preggers, I suddenly have revived interest in checking out baby items. There are so many "requirements" now for mothering, from $1600 strollers (see my post regarding this) to the fanciest bedding (soon to be barfed upon until it looks like piles of old dishtowels), that we often lose sight of the smaller items that baby really likes.

While it's impossible to predict what object the baby will attach to (a blankie, a thumb, some hideous bear), it's a nice idea to plant cute objects around, just hoping the baby will take interest. That's why I like this cute knit Dino so much. It's not some stupid bear. It's not gender specific (all right, some will argue with that statement, but since when is Stegosaurus a guy thing?). And it has no detachable parts to end up baby's gaping maw as she tries to suck the life out of poor Dino. Plus, since it's cotton, baby won't end up with a mouthful of fuzz.

Olive and Cocoa, purveyors of our prehistoric friend, wrap him beautifully in a wood crate with ribbon. At $48, he's a gift that might outlast even the fanciest stroller. But if not, at least he's cute. At Olive and Cocoa.
Posted by The Toad at 10:29 AM