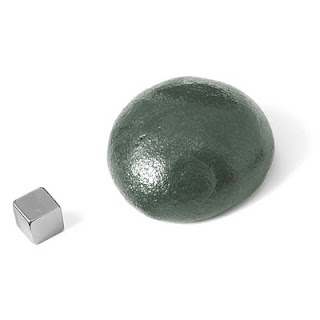 There's all kinds of wild games and toys out there, involving batteries and outlets, assembly and parental cursing. But what I've found is, in the end, nature's forces often deliver the most interesting toys.

I'm a big fan of magnetic toys, for instance, and so is my daughter. Bucky Balls (that collection of tiny magnetic balls) have been a hit around here. But this magnetic putty has definite possibilities. This picture makes it look like a rock, but it's actually a moldable putty. It's accompanied by a very powerful magnet; hold the square away from the putty, and watch the putty "reach," tentacle-like, to try and join it. Fascinating. Of course, the putty's good for all the usual magnet tricks, sending paper clips rocketing toward it, getting it stuck to the fridge, etc. Just don't get it near your credit cards, or I have a feeling they'll be permanently de-magnetized.

Find this very animated "rock" at Uncommon Goods. At just $14 a pop, it's a pretty cheap elemental thrill.
Posted by The Toad at 10:05 AM