The Toad Says "Boo" to the Switch Witch 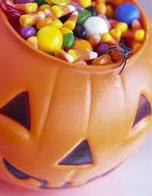 Parenting in L.A. means putting up with a lot of helicopter parents. They mean well, they really do, but their collective issues, fears and stuff mean that they try to control every little thing in their kids' lives.

Take Halloween, for instance. It's already been somewhat ruined by the idea that kids in masks might get abducted by creepy adults in masks (a completely debunked fear; Halloween was recently named the safest night of the year for kids). Now, parents trail after their children, controlling the trick or treating on every level. Who will TP the neighbor's house? Who will experience the blast of being sans parents, outside, at night, for a brief 45 minutes. Not our kids. Sad.

But you know what's even sadder? Now the parents control the candy consumption through a bogus new myth called the Switch Witch. The idea is that the kids can eat candy up through Halloween, but after that must leave their hard earned sugar on the front porch, for the Switch Witch to whisk away and replace with a toy. Huh? Really? Whatever happened to just letting the kid keep the candy? What's the worst thing that could happen? Sugar highs? A few spoiled dinners? Halloween candy consumption is not only a childhood tradition, but it's an excellent way to find out if your child can delay gratification. My kid, for instance, will stash the stuff and dole it out to herself over weeks. What's wrong with that? And why, really, would I ever take the candy away from her and replace it with some crappy toy made in China?

And you know what's really at the bottom of this Switch Witch nonsense? Parents who can't control themselves. Yep, the Switch Witch is simply an extension of their sugar-craving, chocolate-seeking, food-issue suffering tendencies. The parents want the candy out of the house so they won't eat it. That's just so pathetic. So I say "boo" to the Switch Witch. You want to get rid of that candy? Show some character and have your kids donate it to the troops overseas. God knows they could use a little sweetness.
Posted by The Toad at 11:23 AM

Love it! We eat ALL of our Halloween candy here. We enjoy every single sugar high!!!