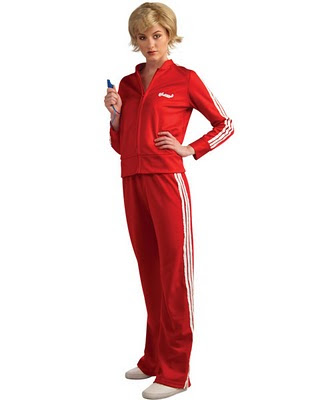 Yes, I know it's not even October yet, but I figured I'd start now on the Halloween costumes, sprinkling my finds throughout the next couple of weeks. While we only see Halloween as a chance to steal our kid's candy (fun-sized Snickers, yum), the choice of costume is a big deal for kids.

What's also been a big deal for a long time is the trend of women dressing like, ahem, sluts on Halloween. Yes, I agree it's all in good fun, and I even used to occasionally indulge myself (Pris from Blade Runner, anyone?), but I'm seeing it trickle down into little girl costumes. That's where I draw the line; my daughter has her whole life to sleaze it up, but it's not going to be on my watch, or on my dime.

That's why this Sue Sylvester outfit from the show "Glee" is so funny. It's simply the antithesis of slut night. Covered up, almost unisex, bad hair, loud whistle, and it's a character played by Jane Lynch, one of the funniest actresses in recent years. Alternatively, you could buy this outfit, stick a man's wig on the kid, and say she's channeling "The Royal Tennenbaums." Up to you.

This costume is also on sale, for about $45. While this sounds steep, at least it's a track suit instead of two strings and some coconut shells. At Costume Supercenter. Whistle or megaphone is extra.
Posted by The Toad at 7:59 AM

That is an AWESOME costume!