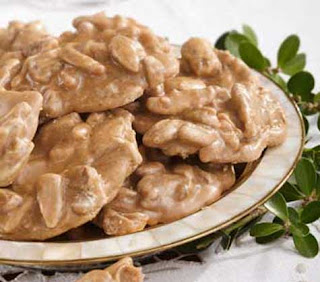 Or, enough sugar to fuel Savannah, Georgia. Yes sir, we're all about the pralines today, particularly the real pralines produced in the South.

Why pralines? Well, because there's candy and then there's candy, and these pralines, made by hand in Savannah, are unparalleled. Obviously, there's nothing like entering the River St. Sweets store on the town's seemingly ancient riverfront. The smell of sugar and caramelization is overwhelming, not to mention the fact that the store's Southern hospitality includes passing out pieces of warm praline to everyone walking through the door. After just one taste, everybody buys some. The outrageous disks of sugar, cream, butter, and enormous pecans simply melt in the mouth, delivering an initial hit of almost overwhelming sweetness, followed by the earthy soft give of the pecans, and ending with a whisper of richness down the throat. Dare you to take just one bite (or indeed just one praline, although these suckers are really big; more than two could induce a diabetic coma).