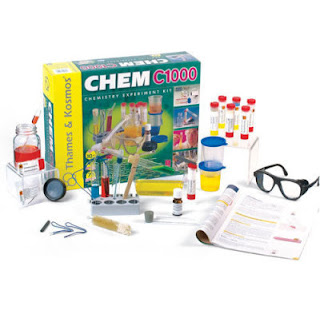 I remember reading Harriet the Spy and totally idolizing the chemist Janie. The idea that she was going to blow up the school (or was it the world?) held such great appeal. Of course, I had no chemistry skills and no chemistry set.

What I would have given for this little item! This introductory chemistry set won't encourage your young scientist to blow stuff up, but it will teach basic chemical principles through some fun (and harmless) experiments. Many of the exercises are disguised as "magic tricks" to share with an audience, guaranteeing lots of live entertainment long after the holidays have ended and dark winter has resumed. This set is fairly serious (some of it involves flames), so it's really for kids 10 and up (unless you have some genius seven year old who's very neat and trustworthy). Overall, this is a far better way for kids to spend time than vegging out in front of the tv for the remainder of holiday break.

At around ninety bucks, this set isn't cheap. But it was very highly rated as one of the best science toys around. Buy it and watch the science aptitude soar. At Museum Tour.
Posted by The Toad at 9:06 AM