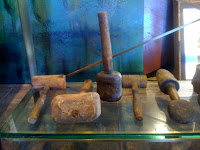 It seems clear to me that if you're reading this blog, you're probably not opposed to technology.  After all, computers and mobile phones, high definition tv and internet dating, Bluetooth enabled cars and Facebook "friends" are all just part of your everyday landscape.  But what about the technological misfits?
You know who I'm talking about.  The stubborn people who still use a typewriter.  They still have their answering machine with its original cassette tape intact. Caller ID?  What's that?  And for them, the Internet is something someone named Al Gore invented to steal their identity, send them emails from African government officials and get them addicted to porn.  None of that newfangled technology for them, thanks.
They are the Luddites.  And you can't change them.  But you can give them something to make their rigid little hearts beat a little faster.  Designer Gary Gibson opened his loftlike showroom in Los Angeles partially because he loved to collect things.  And his collections are firmly 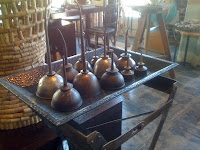 rooted in the deeply nostalgic past.  Check these out:
Everywhere I looked, Gibson's store harkened back to a past where Luddites still long to tread.
Gibson's web site (www.garygibson.com) shows off art, furniture and interior design too.  He gets in new old stuff frequently, so you can always contact him through the site for the newest goods for your oldest (or oldest-seeming) friends.
Posted by The Toad at 4:30 PM