Go Nuts for the Holidays 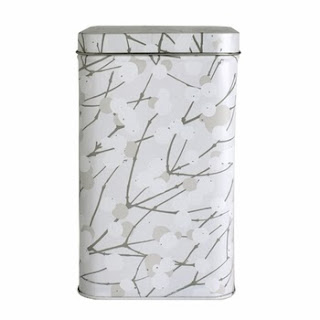 So here it is: the semi-homemade present. No, I am decidedly NOT channeling Sandra Lee (a black mark on the art of cooking if there ever was one). I'm just saying, even if you plan to make something yummy and give it out as gifts, you'll still need a nice way to present it. Forking out a few bucks is not something the gifter ever escapes.

So take a look at this Marimekko Tin. It's holidayish, but still could be left out on a kitchen counter year round. It holds a respectable amount of goodies, and when the goodies (which you provide) are all gone, the tin can store tea, or inferior treats, or even a lifetime supply of cotton balls in the bathroom. Buy some of these tins, fill them with something good that you make, pop a bow on the top and call yourself done.

As far as a delectable homemade treat goes, I'm making it easy by offering you one that's always been an enormous hit. I grew up in one of those anti-sugar 1970s households (carob instead of chocolate, anyone?), so when my mother would suddenly start making these cinnamon nuts for the holidays, they spread more than the usual amount of good cheer. These nuts originate from the From Noodles to Strudels cookbook, and there's something deeply ironic about giving them as Christmas presents, but whatever. Make a bunch of these, because they're the homemade treat equivalent of crack cocaine.

2 cups of whole nuts, any kind you like (almonds and pecans are good, but only because I'm allergic to walnuts; Trader Joe's is a good place to purchase nuts)

At this point, add vanilla and nuts and mix well. Spread out on a sheet pan lined either with a Silpat mat or parchment paper to dry. Break up into smaller clumps and watch them vanish down your family's gullets. Make another batch.